WE ARE READY FOR THE NEW PERIOD

Share on FacebookShare on Twitter
The 15th General Assembly of our union convened on 6-7 August 2022 at The Green Park Bostancı Hotel in Istanbul.
DİSK Chairman Arzu Çerkezoğlu met with our delegates from various cities and workplaces on Friday, August 5th. Çerkezoğlu, who was greeted with the slogans of “Unbearable Union” and “Outstanding DİSK”, wished success to our General Assembly with a short speech.

The general assembly, in which 85 percent of our delegates were present from the first hours, started with the opening speech of Secretary General Celal Aslan.

After the moment of silence, our Chairman Kazım Doğan made a speech on the work of our union and as long as we live.

At the beginning of his speech, Kazım Doğan expressed his gratitude to the founders of DİSK and Tekstil, and respectfully commemorated the presidents of DİSK and its member unions, who passed away in July. 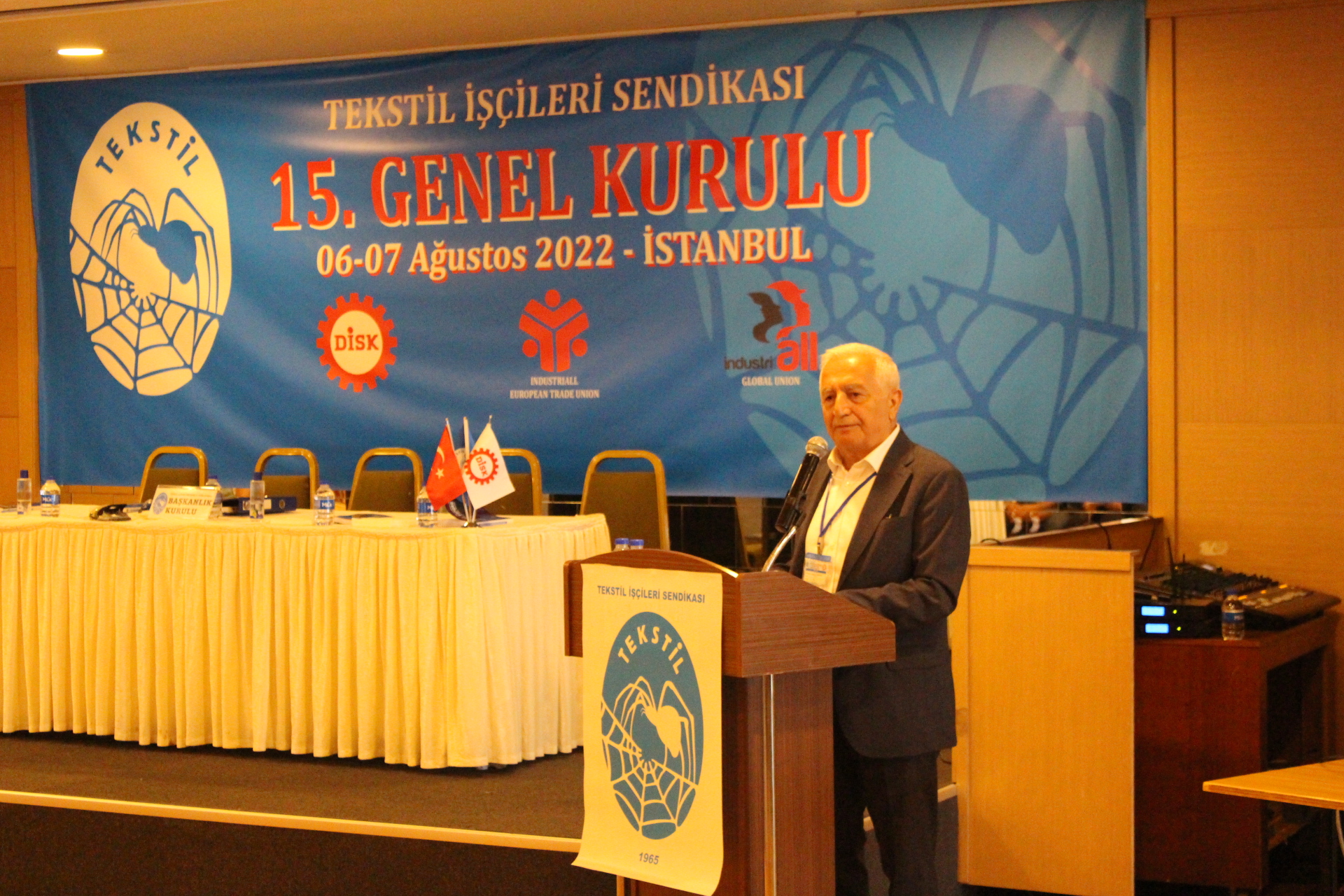 In his speech, Doğan said that we are in a difficult period, that it is only DİSK that raises its voice against the problems experienced and voices its demands on the streets, next to the workers, that they continue to organize despite all kinds of obstacles, including the epidemic, that workers suffer loss of rights due to long court processes, and that they are trying to overcome this, He stated that it is necessary to always work for the growth of the union and the protection of the rights of the workers.

Noting that the increase in the number of members was important despite the problems experienced during the epidemic and the shortcomings caused by the inability to visit the workplaces enough, Doğan stated that the organizational work continued rapidly, but the lawsuit process initiated by the employers unjustly appealing to the court after gaining the majority in the workplace took a very long time. He explained that the lawsuits make the collective bargaining process difficult. 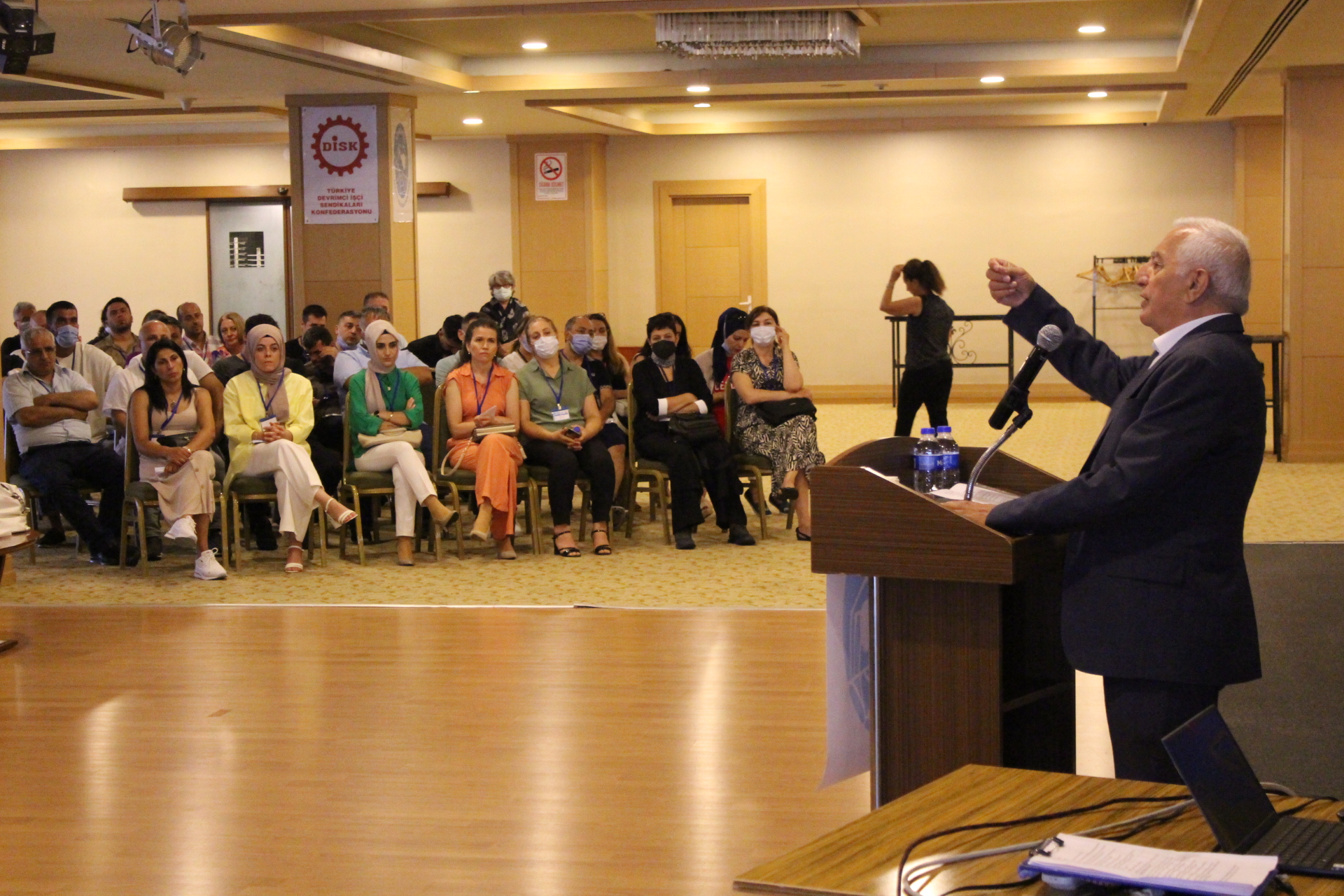 After this speech, the video message of DİSK Chairman Arzu Çerkezoğlu, who could not attend the opening because he was in another city, was reflected on the screens. In his speech, Çerkezoğlu stated that the majority of the population of our country is paid workers and workers, and mentioned that we need to be united in order to protect our rights. He drew attention to the difficulties that economic and social problems created in the life of the working class. Stating that an era is coming to an end in Turkey, Çerkezoğlu said that DİSK has more responsibilities than ever in this process, and that every union, every delegate and every member has a great responsibility on their shoulders. He concluded Çerkezoğlu’s video message by wishing success to the General Assembly of the Textile Workers Union. 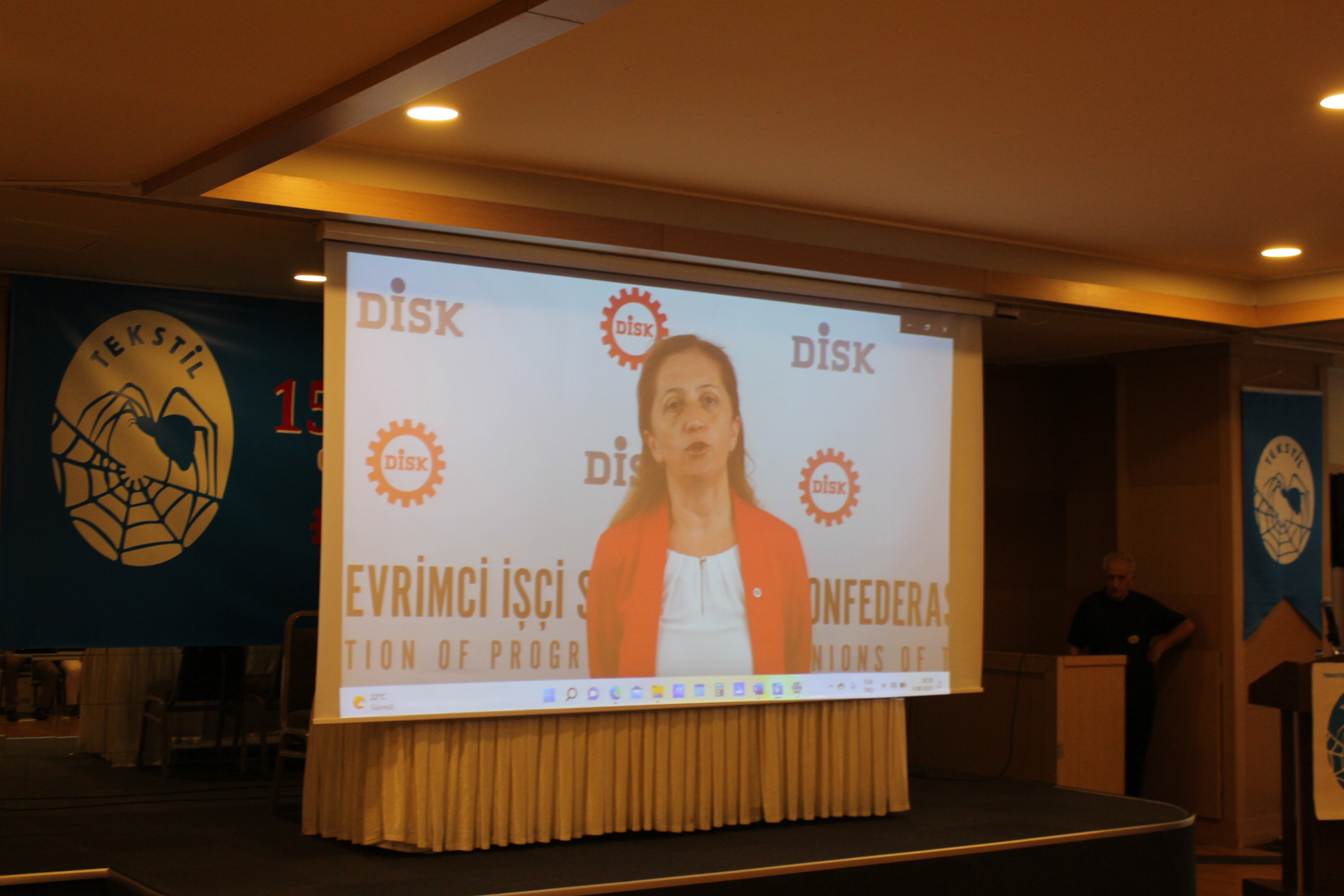 After the opening speeches, the Presidential Board was elected to manage the general assembly. With the motion submitted, DİSK Secretary General and BMİS Chairman Adnan Serdaroğlu was appointed as the Chairman, DİSK Board Member and T. Gıda-İş Chairman Seyit Aslan Chairman and Arife Çevik were appointed as vice chairman; Nurgül Metin, one of our members, attended the General Assembly, Chairman of DİSK Dr. Arzu Çerkezoğlu, the founding board member of our union Hüdaverdi Talay, and the President of Lastik-İş Alaaddin Sarı, and many guests attended. 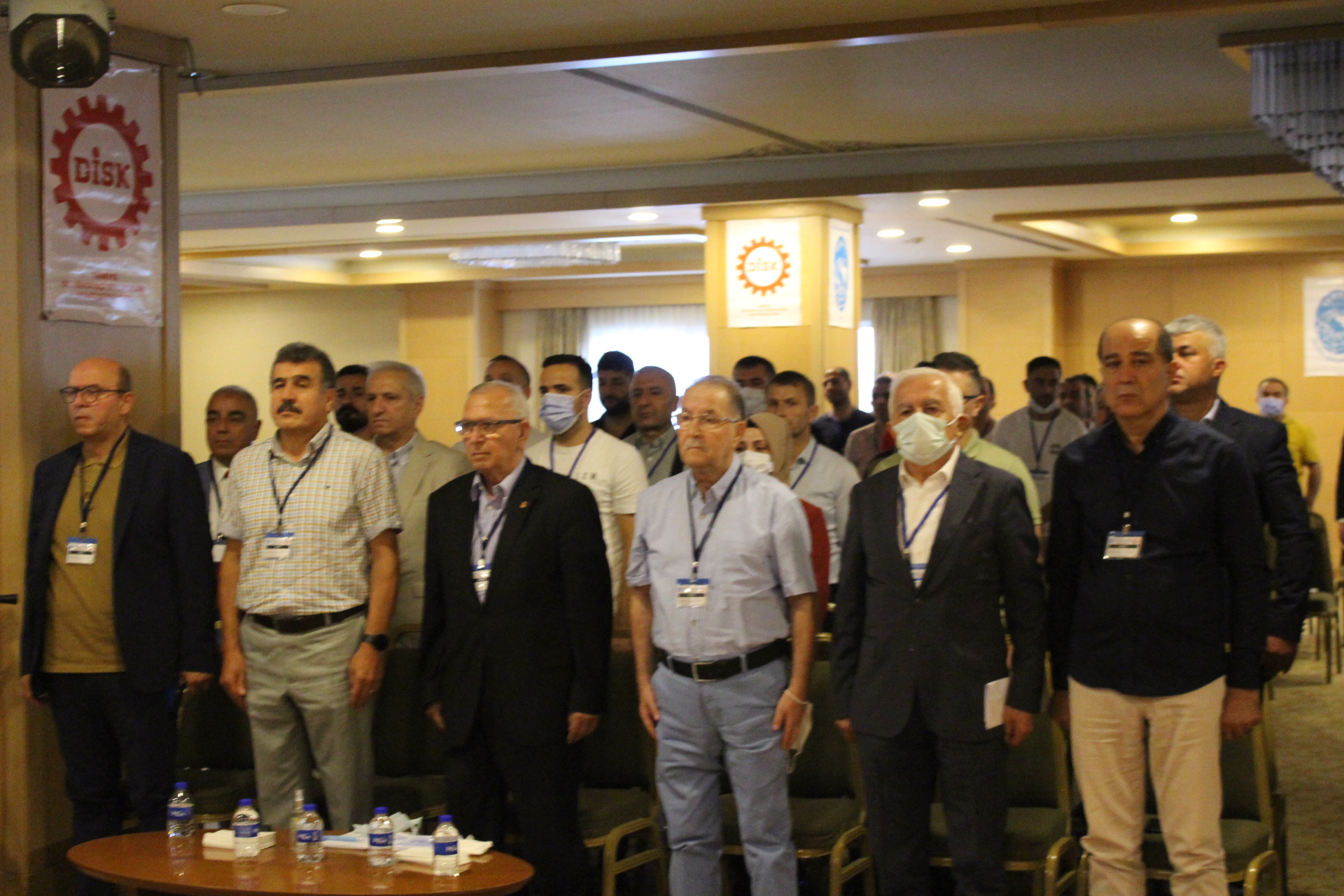 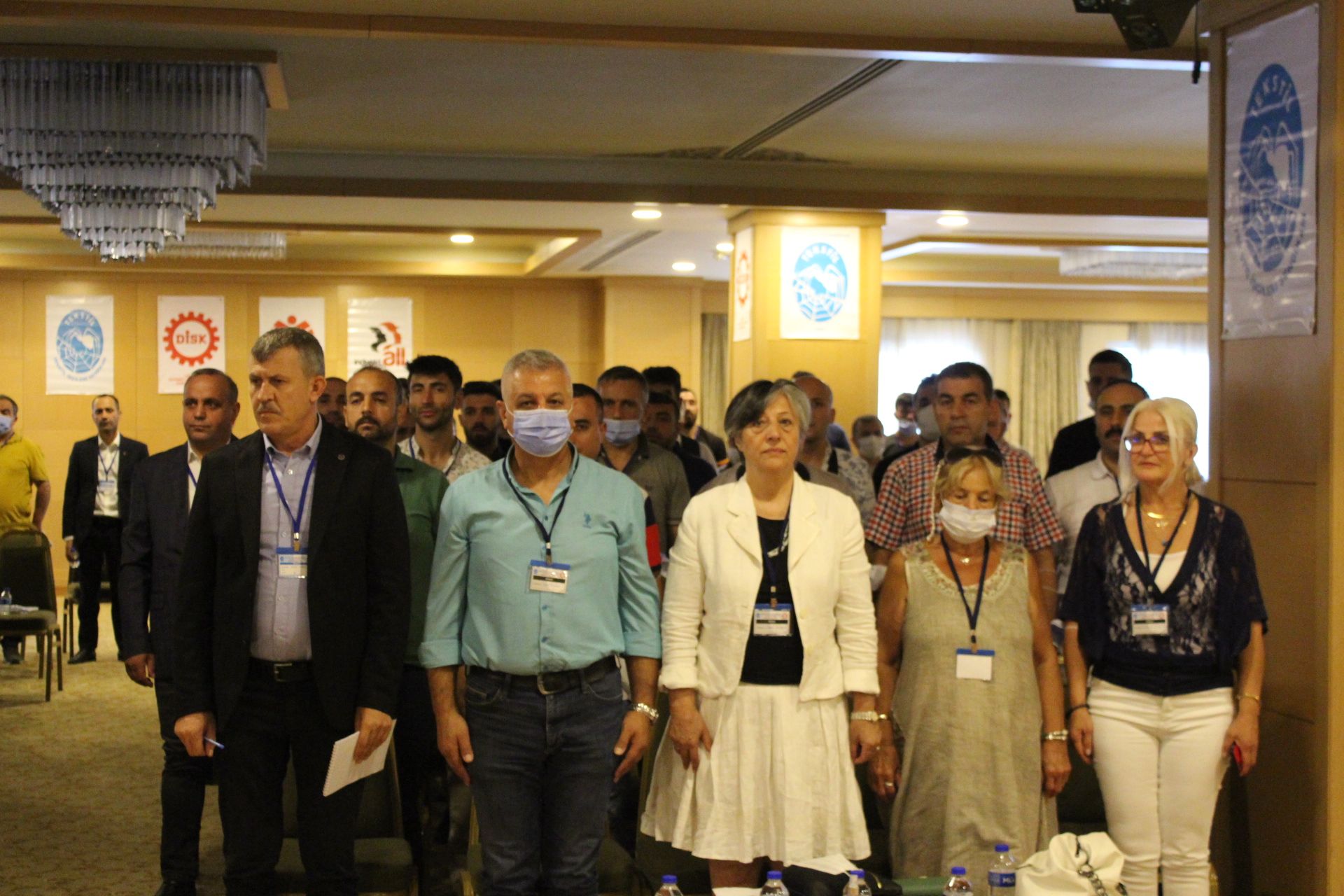 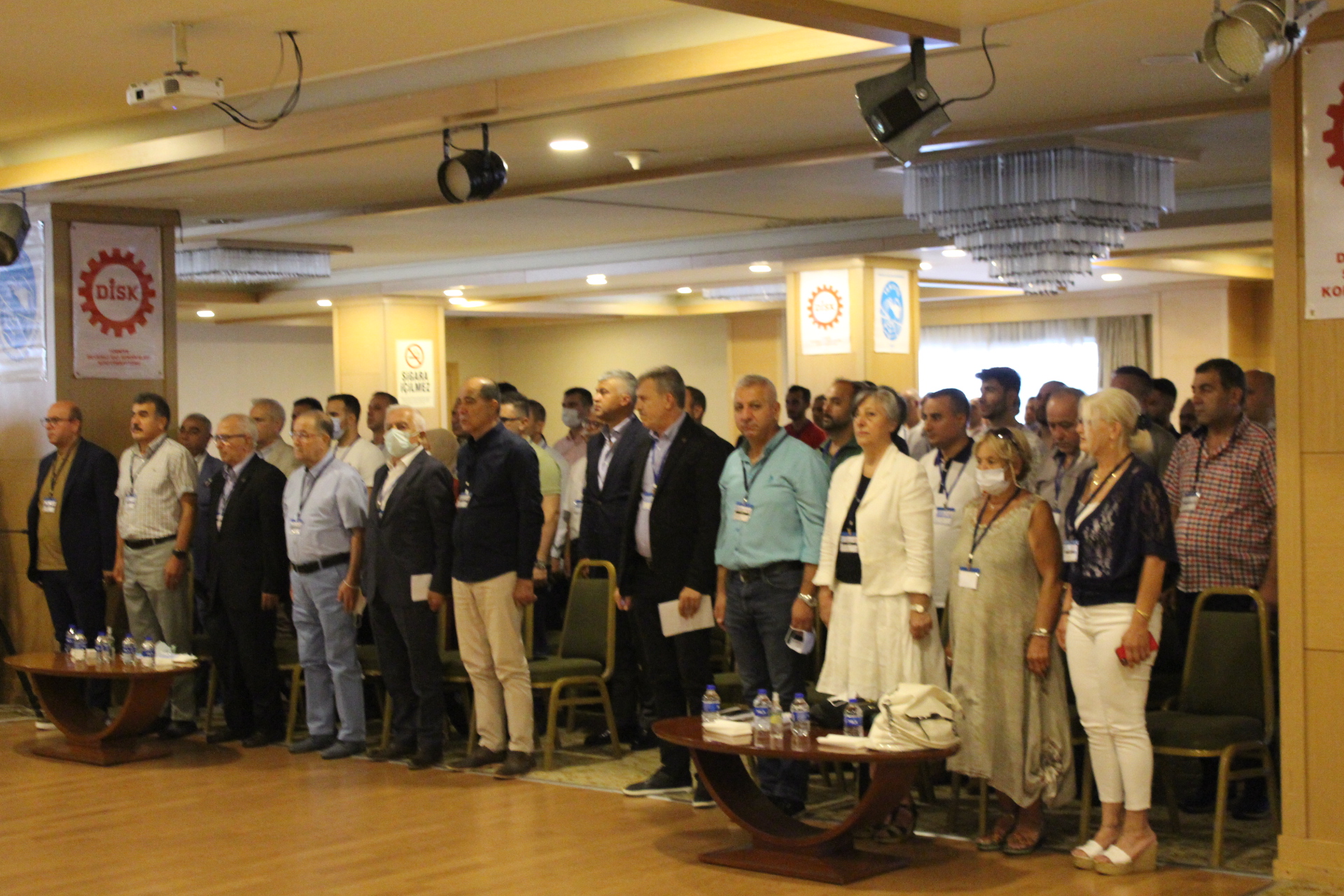 President Serdaroğlu made a short speech to the delegates. In his speech, he gave examples of the struggles of DİSK. Stating that the government causes the workers to become impoverished by constantly giving misleading information, Serdaroğlu asked the question “Do you believe in the inflation announced by TUIK?” Almost all of the delegates answered no. Serdaroğlu explained that as DISK, they are trying to reveal the truth, for example, they have revealed what is wanted to be hidden in the unemployment data. Mentioning the jurisdictional cases, he gave an example of a jurisdictional lawsuit that lasted 7 years. Emphasizing that “a society in love with its executioner” cannot overcome oppression, poverty and lawlessness, he said that difficulties can only be overcome by believing and trusting ourselves, 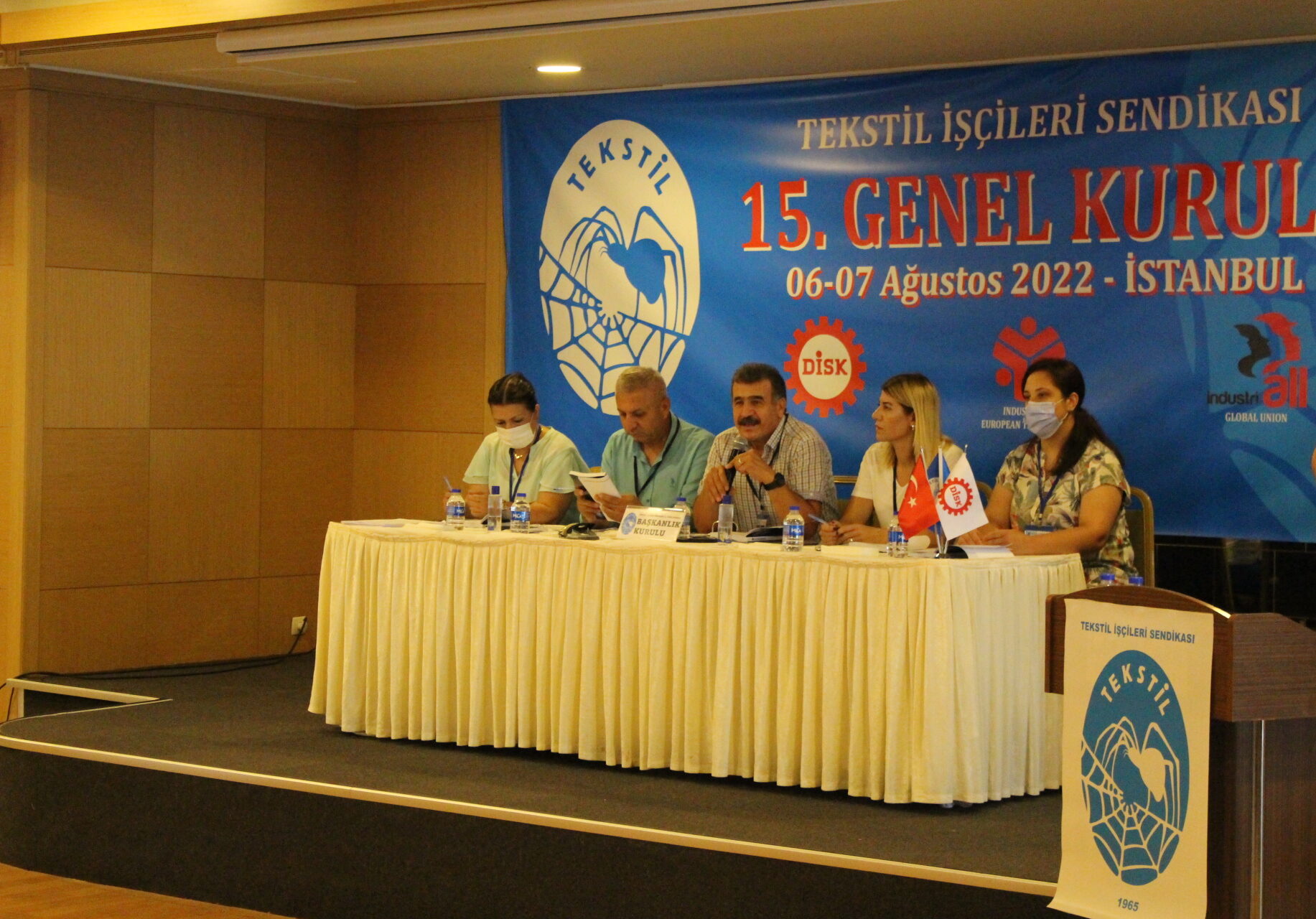 In the following part of the General Assembly, the guests were promised. In this context, Hüdaverdi Talay, who is one of the founders of our union, was promised. Saying that the increase in the number of members of the union is very valuable, Talay quoted from his own experiences on how to gain more members. Hüdaverdi Talay said, “Trust in yourself, they will always want to divide and weaken you, hold on tight to each other, and then you will become even stronger and grow”. 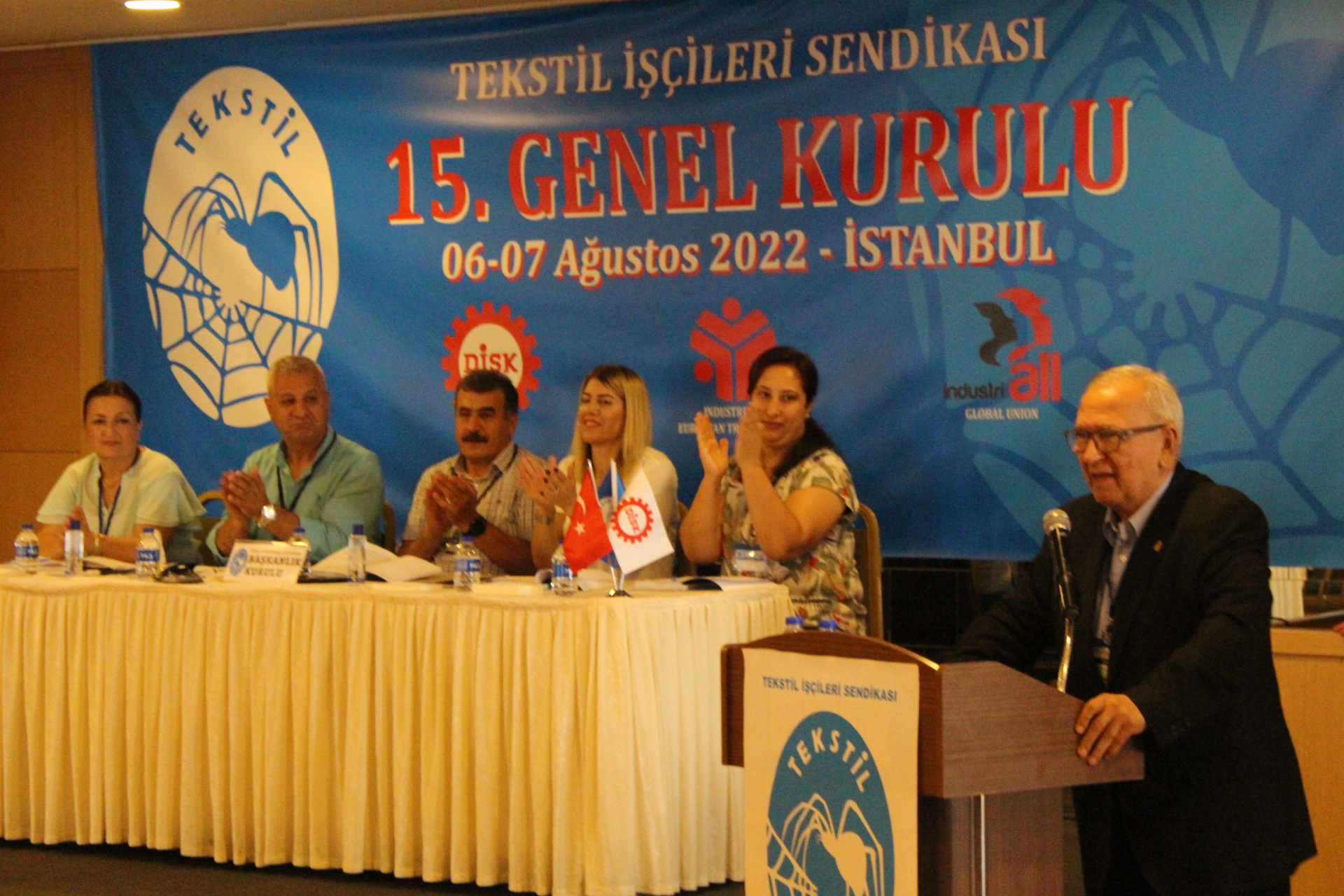 After Talay, the Chairman of Lastik-İş Alaaddin Sarı came to the podium. Sarı, who is also a member of DİSK’s Board of Directors, gave examples of changes in production systems, rapidly increasing automation and robotization processes. He referred to the preparations of workers and their unions for these developments. 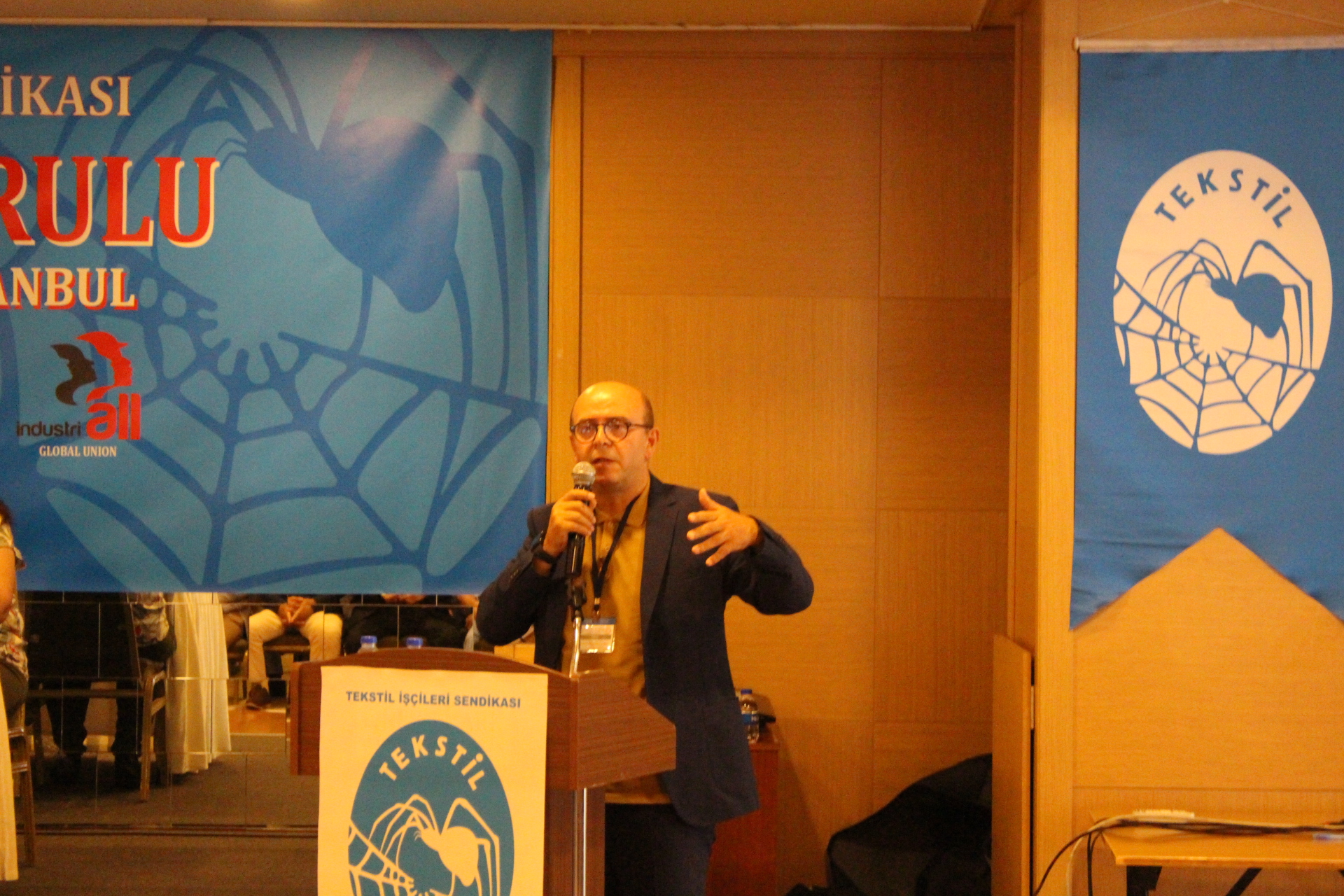 Kibar Özdemir, our former Kahramanmaraş Representative, who is among our guests, talked about the problems he faced during his tenure and how he and the union management overcame them together.

One of our guests, our former Mediterranean Regional Representative, Yusuf Yürekli, emphasized that the union has developed with great success since the day it started again and without a member after the 1980 coup. He pointed out that workers who trust and believe in organized struggle have a great share in this. 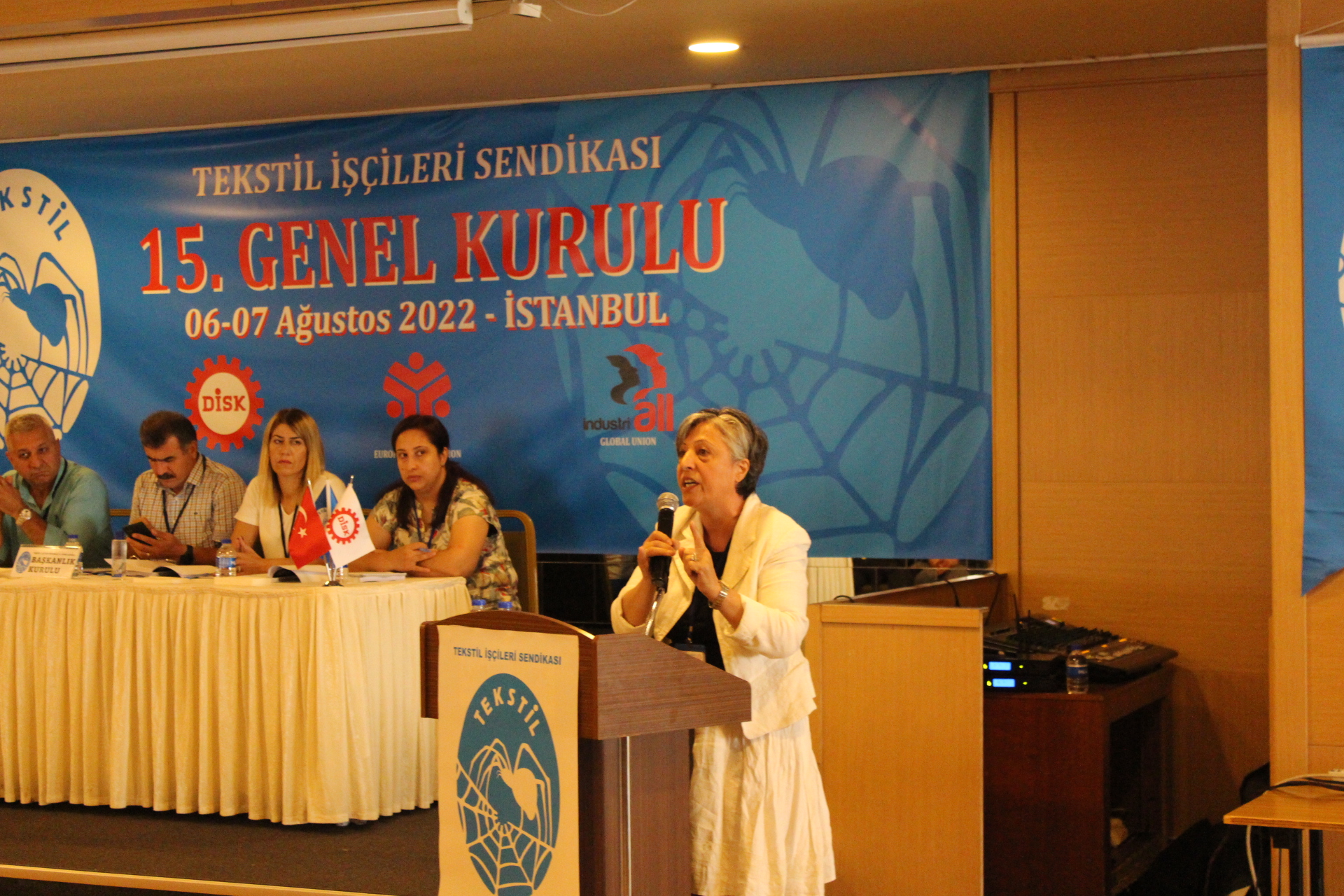 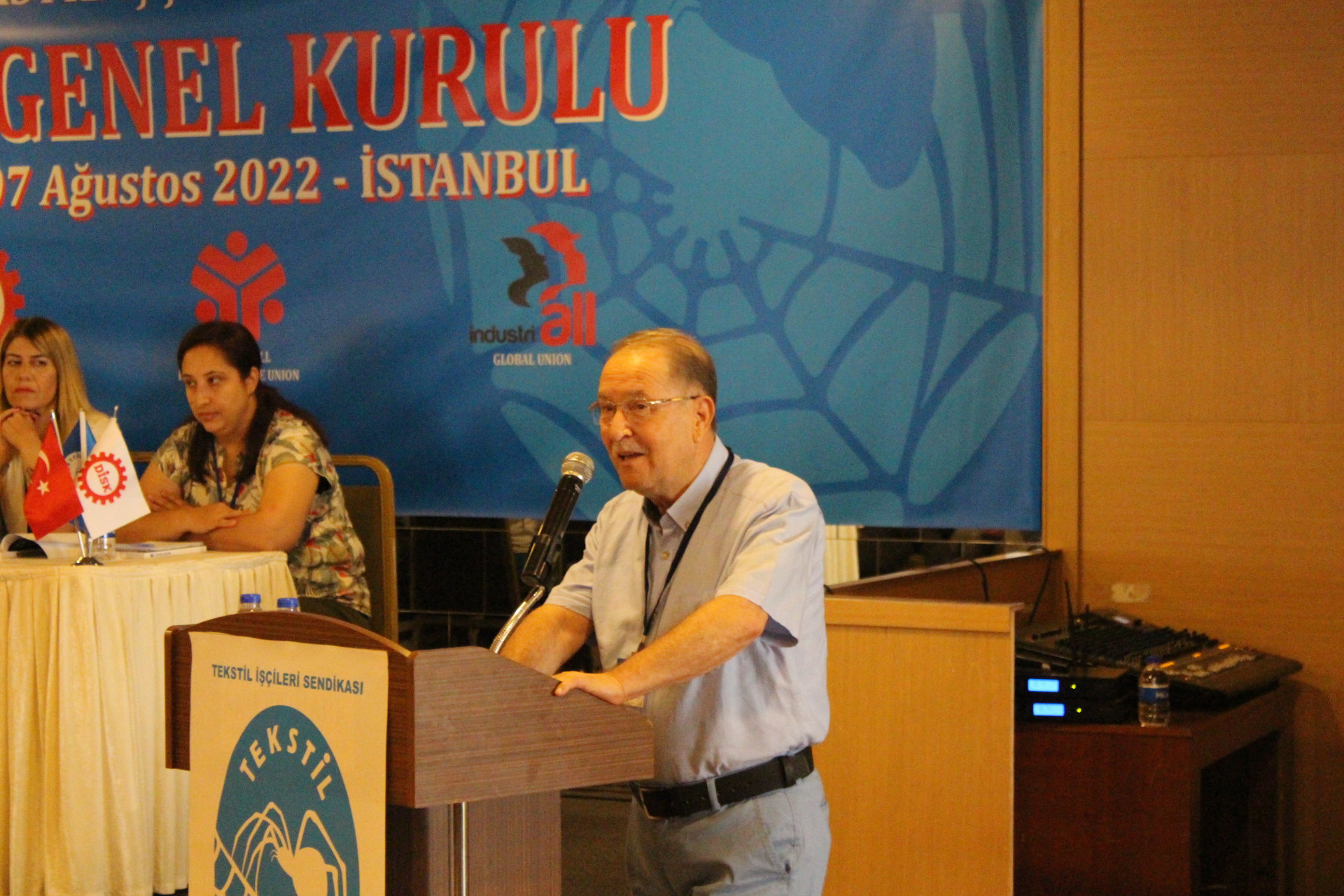 After the guest speeches, discussions on the study report started. Nergis Atik, a member of the General Disciplinary Board of our union and one of our chief representatives of the workplace, Birol Tan and Cihangir Şahan, our chief workplace representatives, Muhammed Özdoruk, the Chairman of the General Audit Board, and finally Asalettin Arslanoğlu, our Istanbul Merter Branch President, came to the podium and made their speeches. 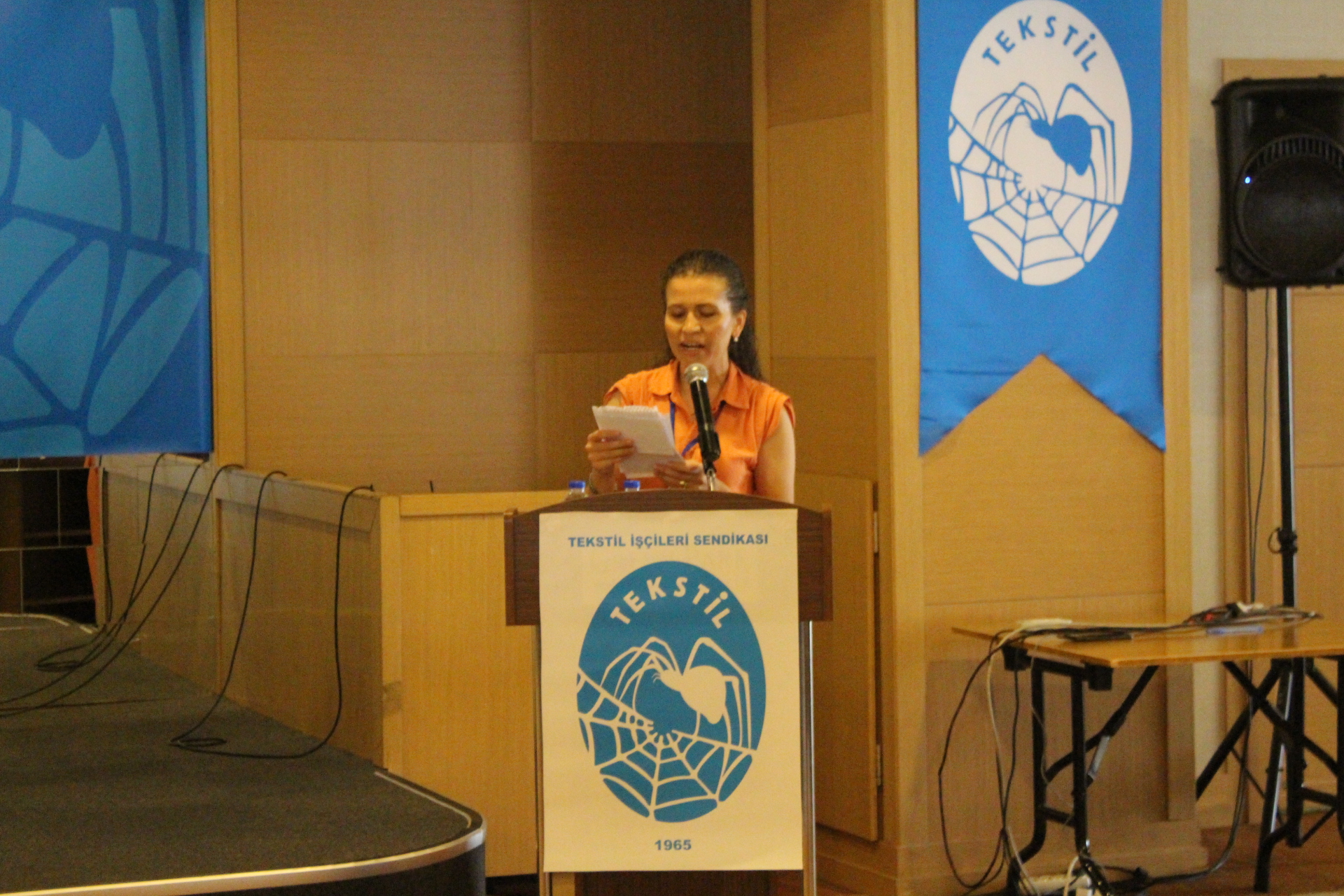 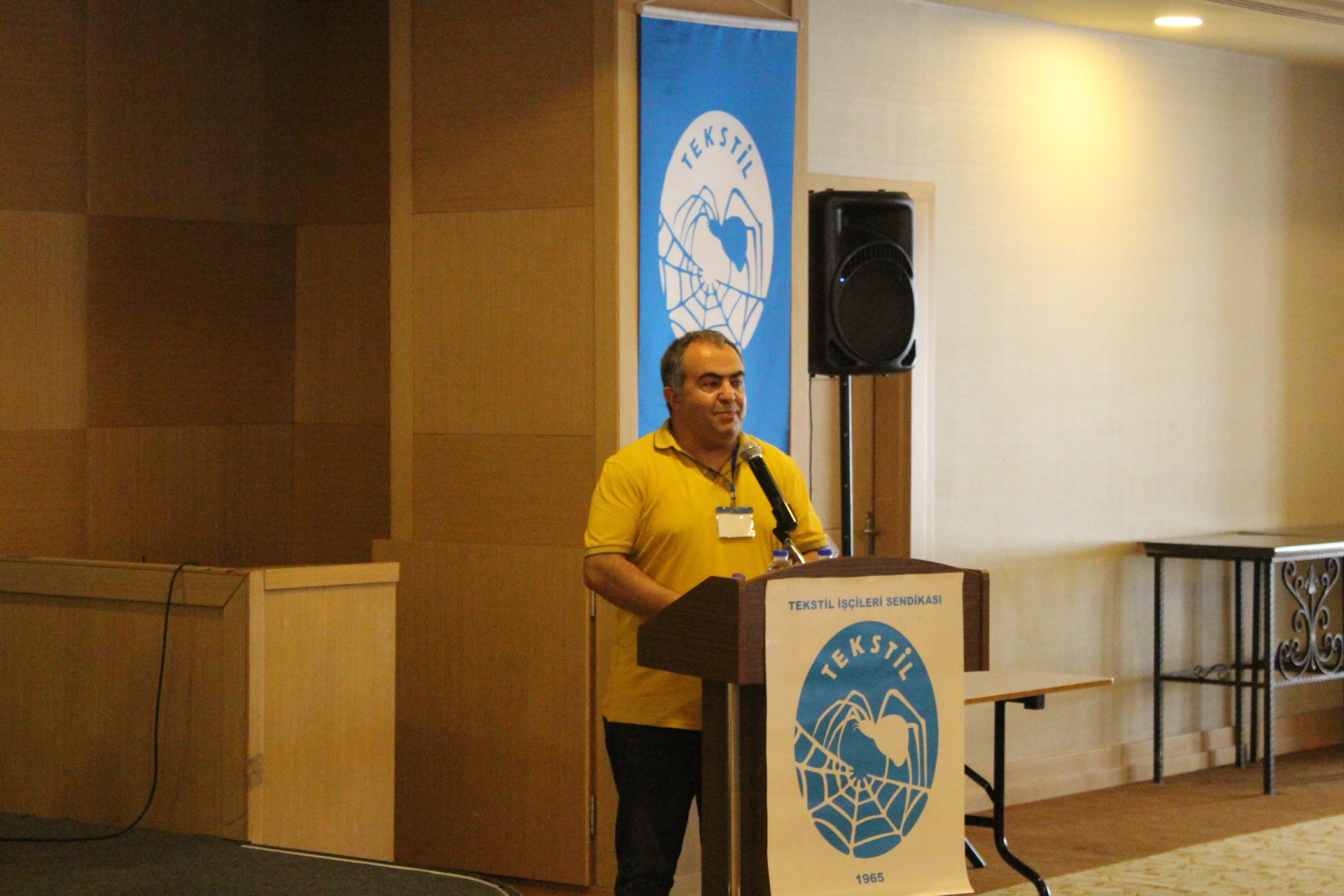 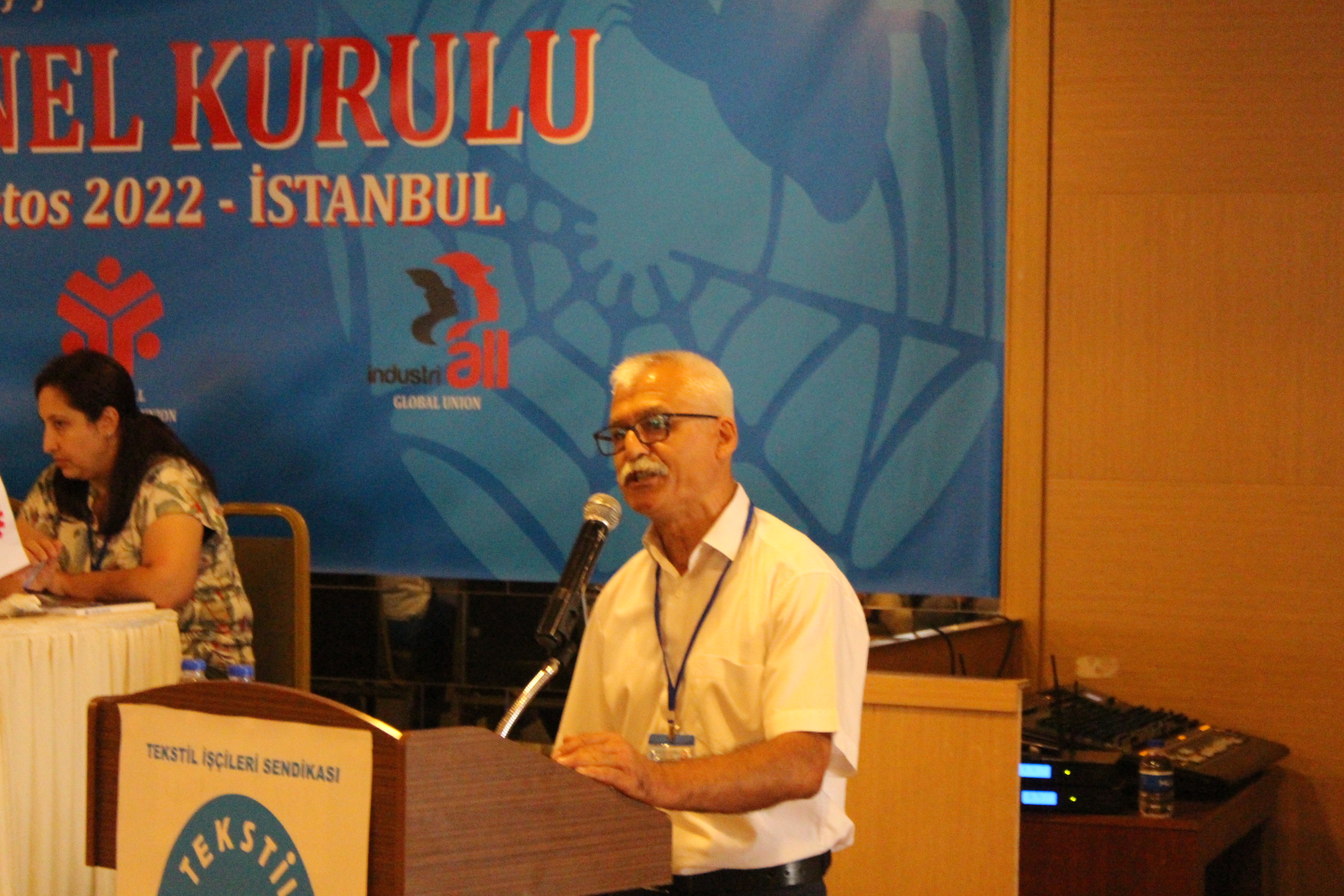 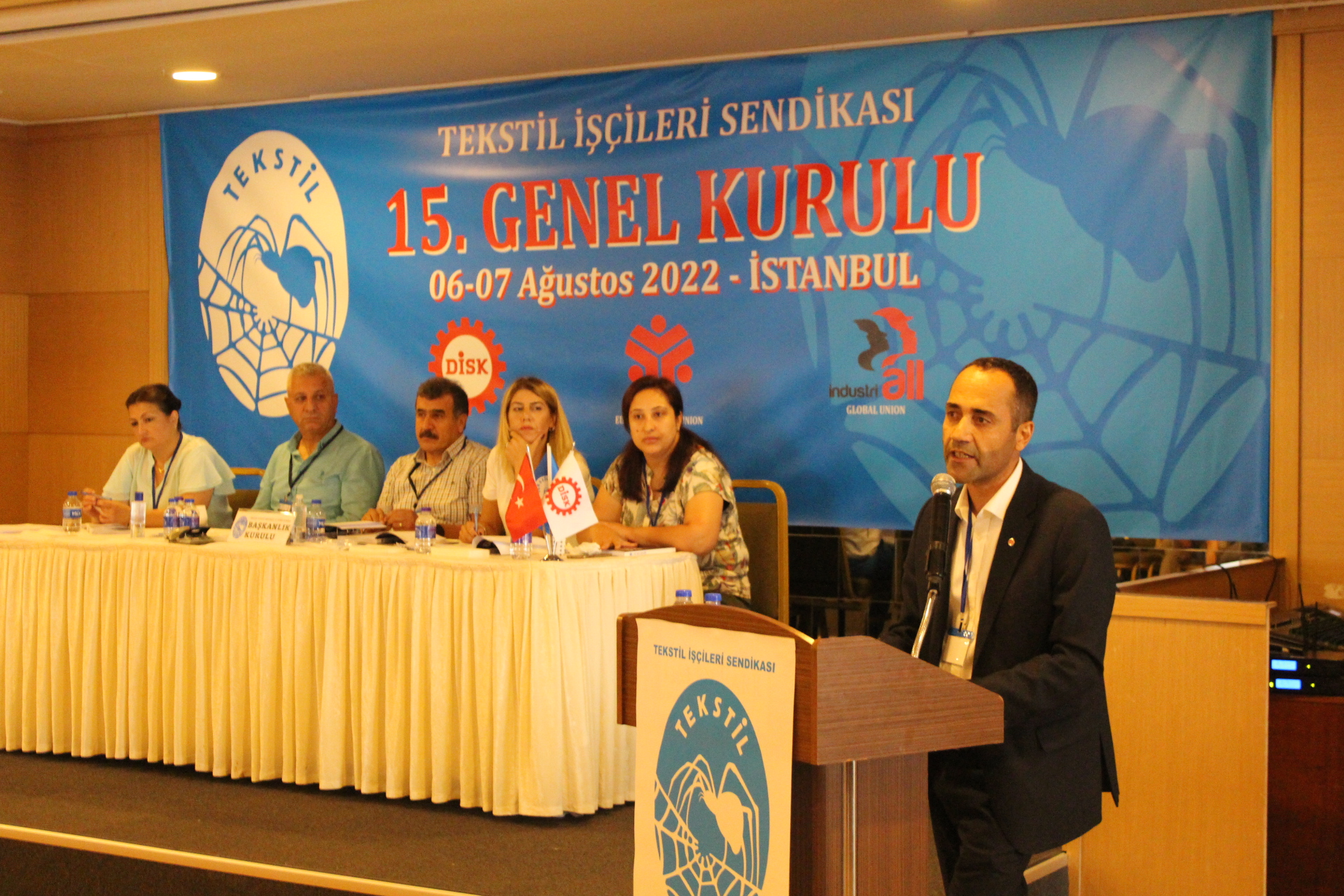 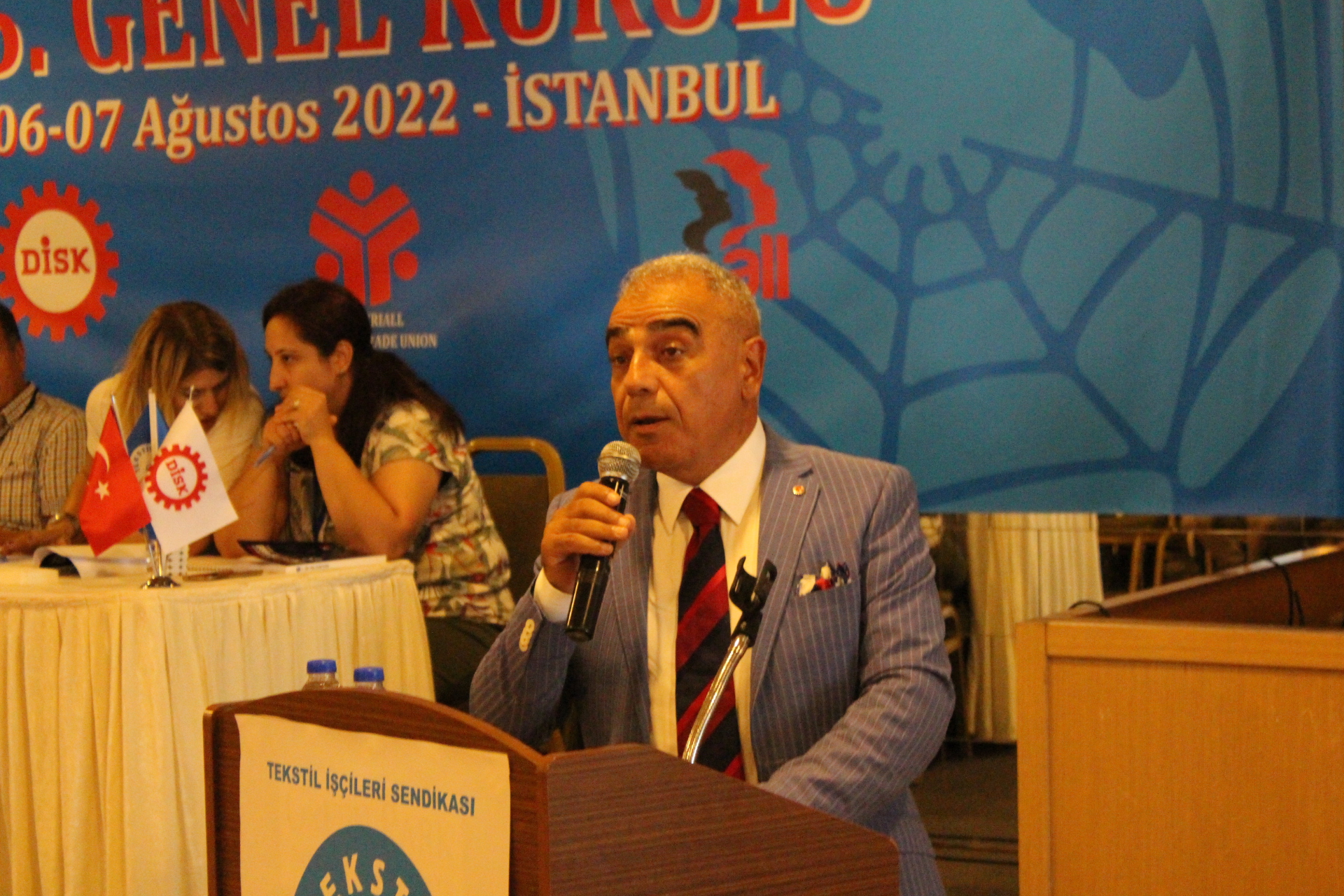 After the evaluations were completed, the Presidency Board had a vote of “acquittal” as per the agenda. All committees that had served in the past were acquitted by the unanimous vote of the delegates.

After the voting, Chairman Kazım Doğan, Deputy Chairman Mehmet Ali Başak, Secretary General Celal Aslan, General Board member Savaş Testici thanked the delegates for their support and announced that they were candidates for the new term. 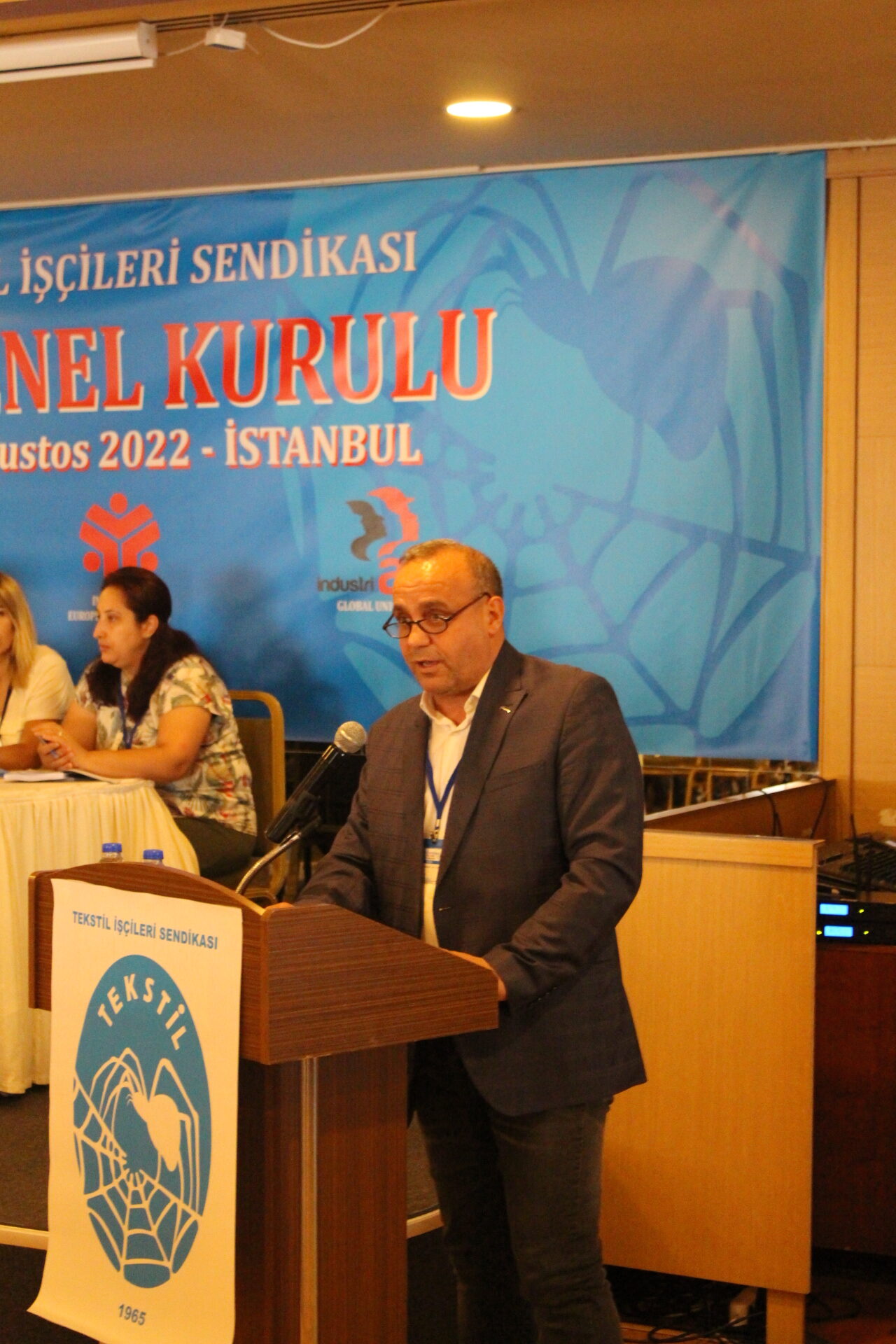 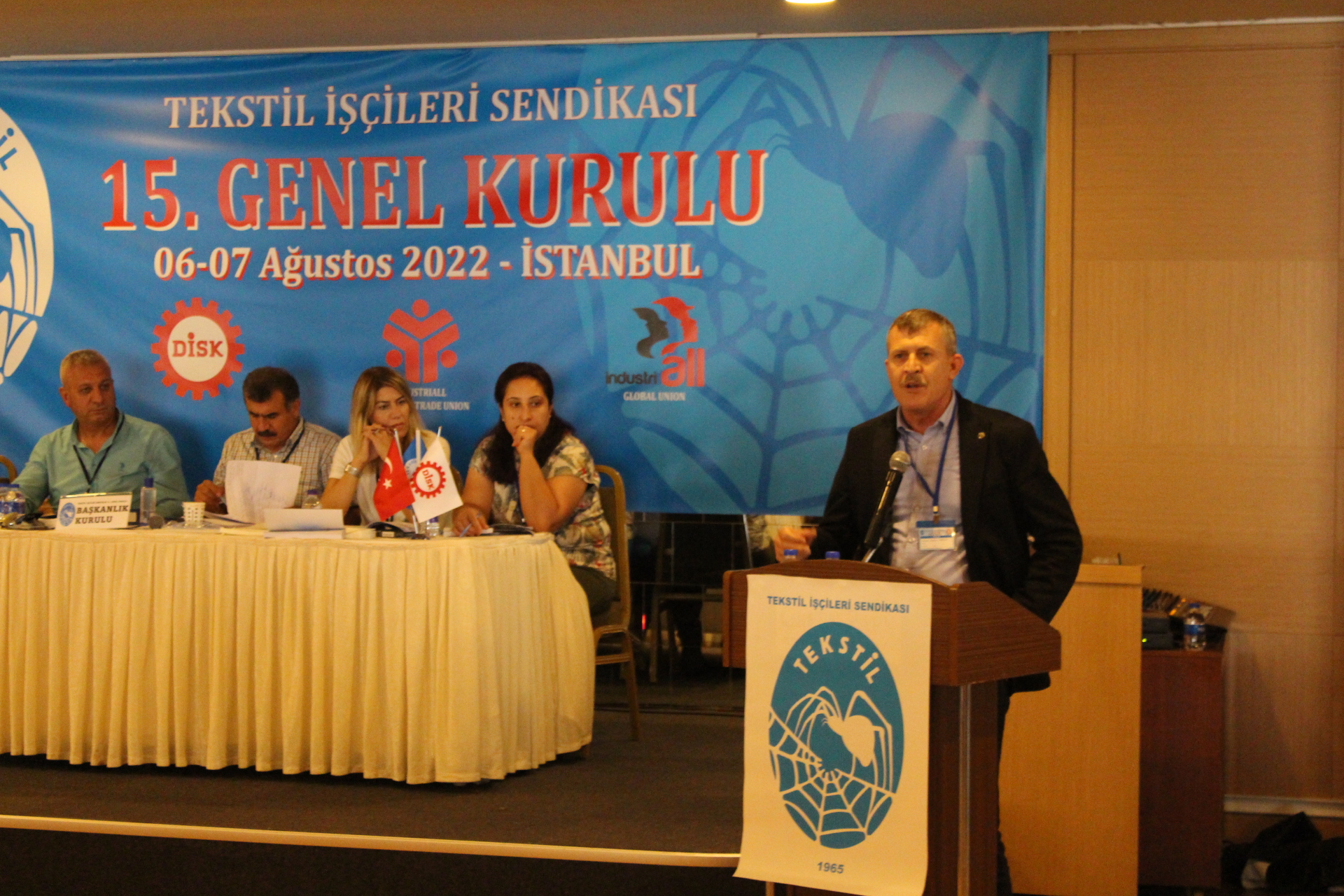 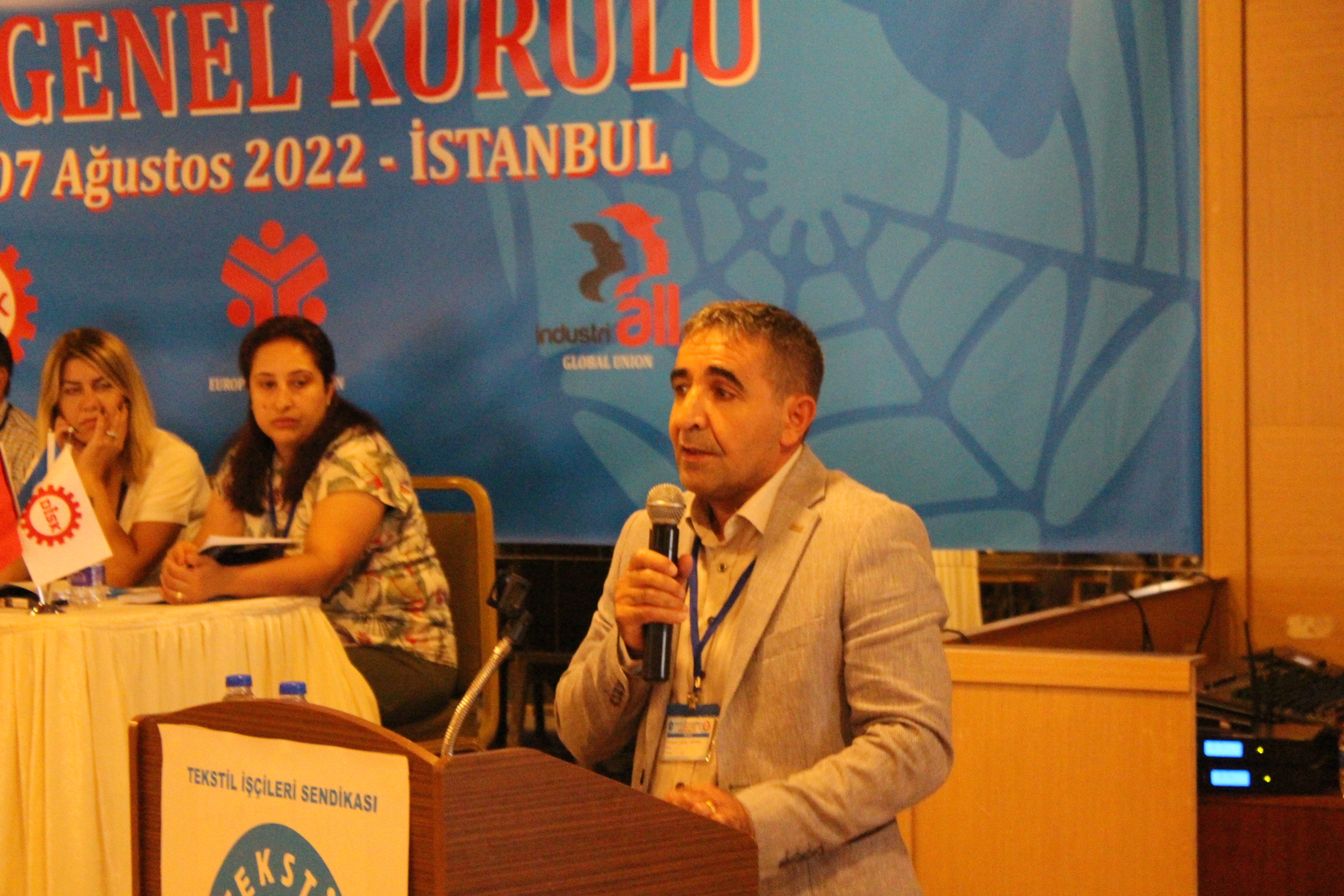 On Sunday, August 7, as a result of the elections held according to the rules of secret ballot and open counting, the principal and alternate members of the General Management, General Audit and General Discipline Boards, and delegates to represent our union at the DİSK General Assembly were determined. 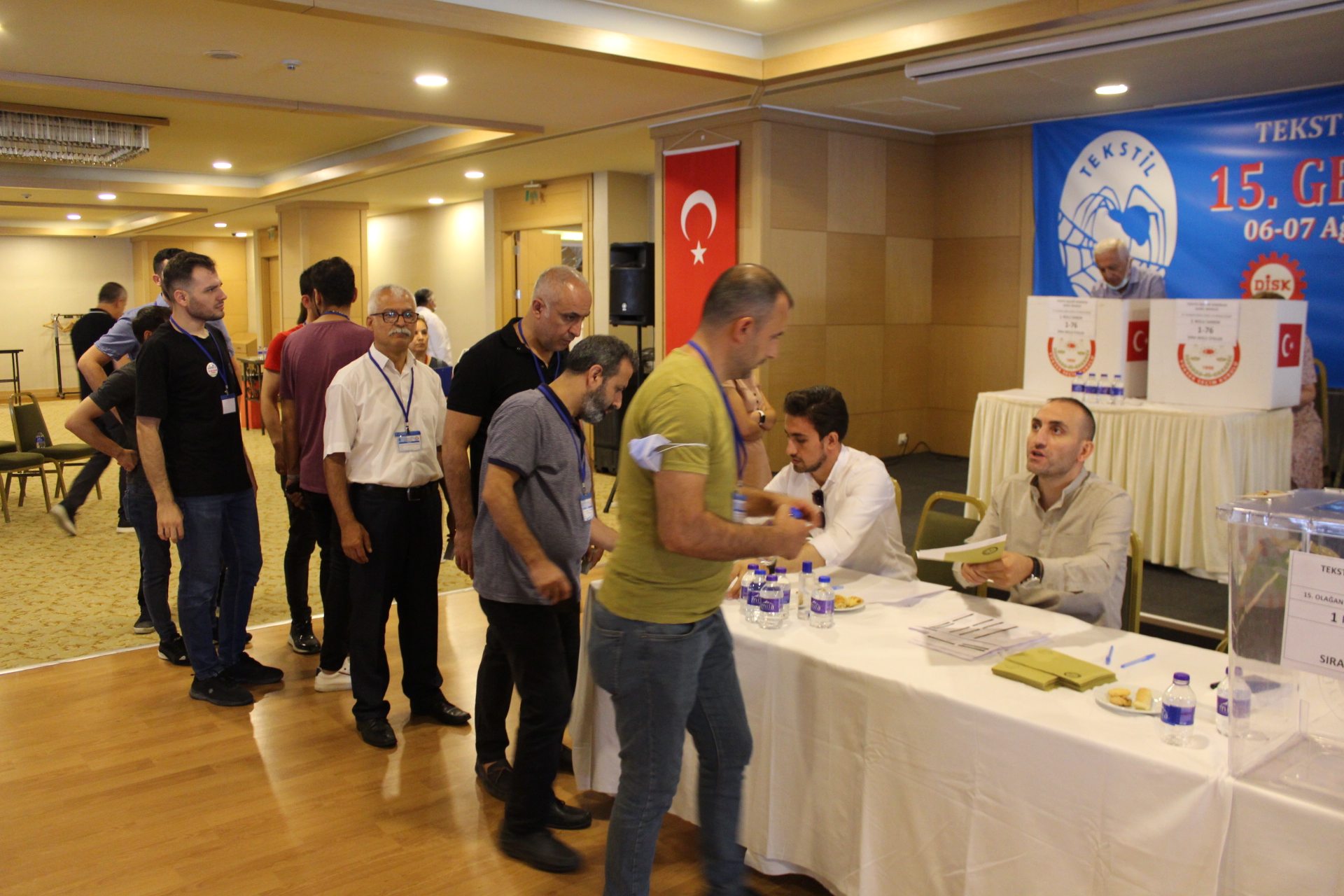 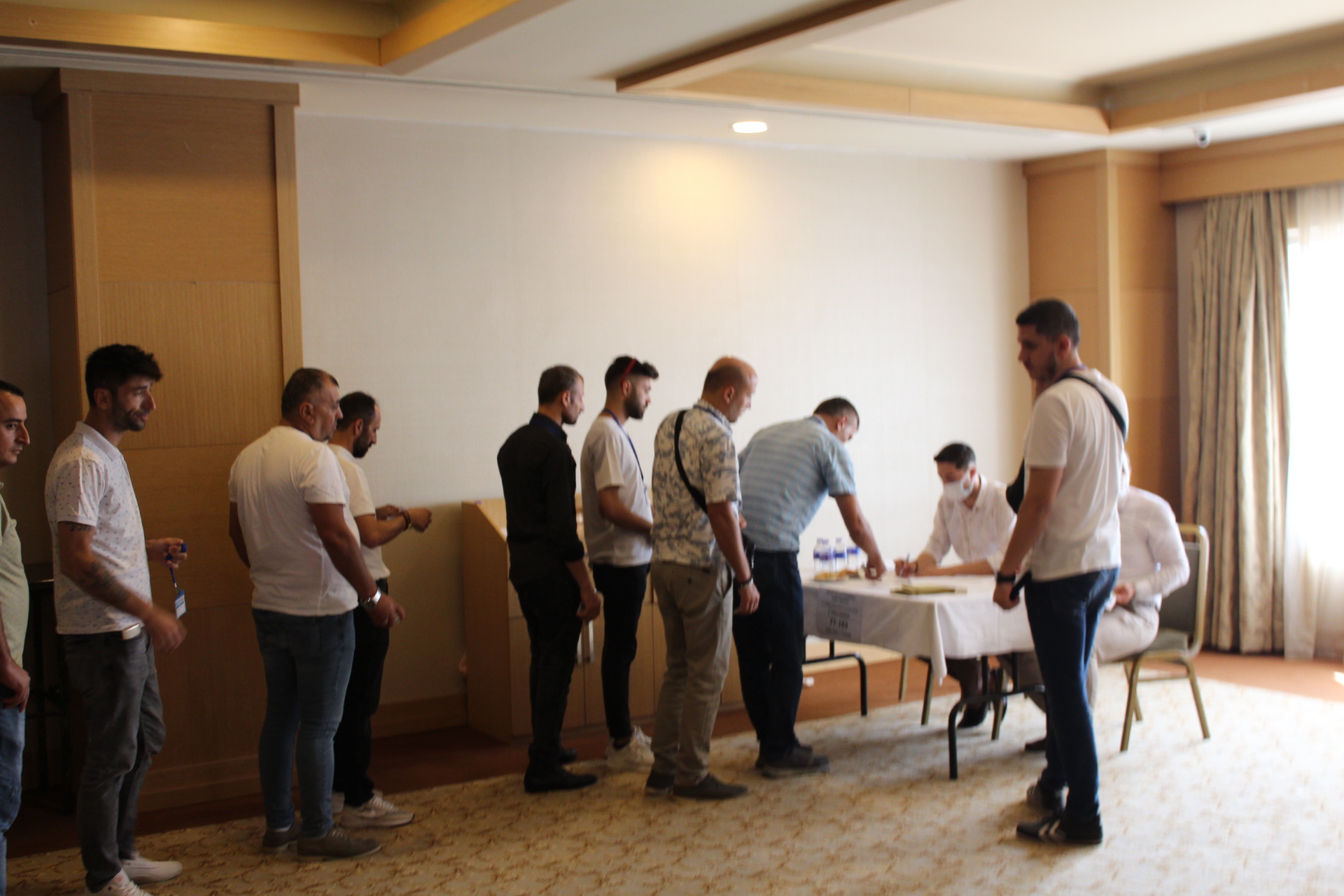 After the voting and counting process, the Chairman gave a short thank you speech to the delegates.

According to the final election results:

Members of the General Board of Directors:

THE GENERAL BOARD OF DIRECTORS DID THE DISTRIBUTION OF DUTIES

In the first meeting held in accordance with the bylaws, the distribution of duties was made. According to the decision taken, Celal Aslan, a member of the General Board of Directors, was appointed as the Secretary General and Cihangir Şahan was appointed as the Vice Chairman.

DİSK-AR: “ONLY 21.4 MILLION OF THE 64.5 MILLION WHO CAN WORK ARE IN REGISTERED FULL-TIME EMPLOYMENT!”