Chairman Kazım Doğan, Secretary General Celal Aslan, workplace union chief representative Ali Özhan, workplace union representatives Taner Agdağ and Faruk Kantar attended the meeting on behalf of our union.
Before the meeting, the current situation was evaluated by the Chairman Doğan and the Secretary General Aslan with our members, and the final session of the collective bargaining negotiations was entered in line with the opinions received.

A new article has been added to our contract this term within the scope of the Convention on the Prevention of Violence and Harassment in the Workplace No. 190 accepted by the International Labor Organization. With this article, the first steps of a new and sustainable infrastructure have been taken in order to prevent violence and harassment in the workplace.

The agreement was announced by the Secretary General Aslan and our workplace representatives by holding meetings in all shifts. 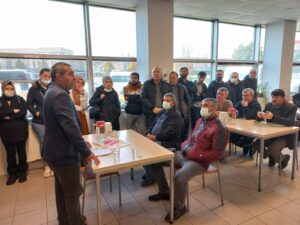