An event was held in Istanbul Cemal Reşit Rey Concert Hall on the occasion of the 55th anniversary of the establishment of our confederation DİSK.

Managers, representatives, members of DİSK and affiliated unions and many guests attended the event held on Sunday, February 13, 2022.

Secretary General Adnan Serdaroğlu made the opening speech. In his speech, Serdaroğlu stated that DİSK is a dialectical result of the labor and capital struggle in Turkey.

The words of the artist Öykü Sertel, who made the presentations of the night, “where hope ends, the cry of the workers’ revolt is heard” drew attention.

Çerkezoğlu, the robbery and inequality of marketized public services; He stated that the oiling and plundering of nature brought the world to the brink of climate disaster.

Arzu Cerkezoglu; “Today, our goal and duty is to re-establish Turkey, where three quarters of its population lives on wage income, as the Turkey of labour,” and continued his words as follows:

“This country is ours and we are standing up for the Turkey of Labor. The Turkey of labor is not just a slogan today, friends. The Turkey of Labor is a struggle program that draws its strength from the demands in the workplaces, on the streets and in the squares. We call on you, all our non-union colleagues, all unionized non-union workers, all our friends here to grow this struggle in unity, shoulder to shoulder.”

After the speeches, Mercan Selçuk Dance Ensemble first came to the stage and performed the dance show “My Father’s Songs”. The ensemble, which completed the dance show with selected works from Timur Selçuk, received great acclaim.

After the break after the show, the award ceremony started. Her granddaughter, Nathalie Defne Gier, received the award on behalf of Can Yücel, who lost her life in recent years due to the poem “The Weather Has Returned”, which she wrote for the 9th anniversary of DİSK. Another award was given to Tan Oral, who has been designing the pages of DİSK Magazines for many years and enlivens him with his drawings. Orhan Taylan, who drew the 1 May 1976 poster and the field board, unfortunately could not attend the night due to health conditions.

The anniversary event continued with the performances of Mazlum Çimen and Mor ve Ötesi. The songs accompanied by dozens of guests added great enthusiasm to the hall.

During the night, cine-vision presentations were made on the stage screen with sections from DİSK’s 55-year struggle. 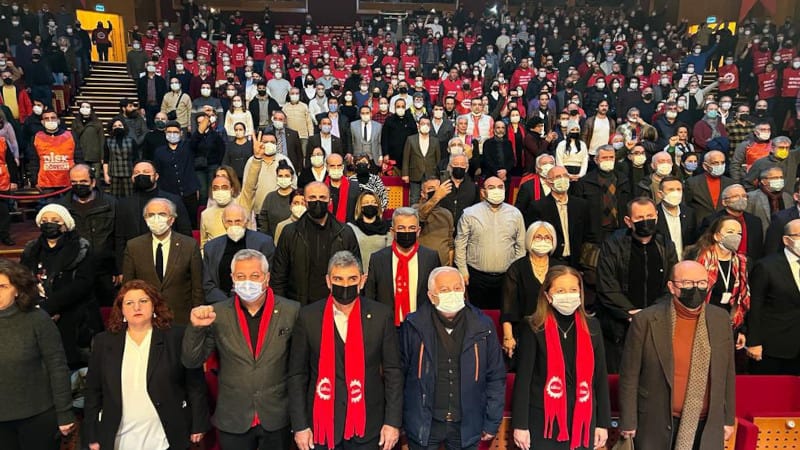